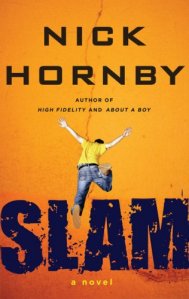 I am not a Nick Hornby fan (not in the same way I swoon over Murakami and recently Burbery), but I never pass a chance to read any of his books. I’ve even endured the football (soccer) heavy narratives of Fever Pitch.  Hornby’s wit and realness makes him a steady part of my reading list. When Slam came out, I was excited. The book catered to a younger market. This was the author’s first attempt at taking the YA crowd by storm. When an author you like decides to dip his fingers into something out of his usual, it is always worth looking at, hence begins my story and my reading encounter with SLAM.

If you aren’t around teenagers much and aren’t used to the way they talk, your initial reading of SLAM can be a difficult experience. As I got myself reading the book, it took me awhile to get into the language, but this is where I commend Hornby. Its male adolescent protagonist, Sam, who has a penchant to talking to Tony Hawk’s Poster narrates Slam.  Hornby consistently delivers teen confusion, attitudes and ideas in earnest and sincerity, which possibly resonates with teenagers. Hornby doesn’t patronize nor does he insult the adolescent experience. There is both immaturity and brilliance in his characters.

In Slam, readers are taken through the adolescent’s attempts at sex and teenage pregnancy.  Hornby delivers two images of teenage pregnancy: 1) 15 years down the road and , 2) At the moment. Sam is a product of teenage pregnancy and we get the picture of how it affected his parents and his mother in their views of the world and early pregnancy. This background gives texture to the story when our teenage boy discovers he will be a father at fifteen.

Hornby doesn’t give us the fairytale. He delivers reality and human experience. There is fear, anger, confusion, ignorance and complex emotions melding into a situation that cannot be denied or erased from anyone’s memory. We hear his mother tell him he shouldn’t just had sex.  Needless to say, he paints a very realistic picture of  teenage pregnancy. The author doesn’t attempt to moralize the situation which makes this book, in my opinion, more sincere.

Slam takes its readers to the most mundane thoughts on skate boarding to issues of social discrimination and determination.  However, if I were to nitpick at Hornby’s narrative it would be in this warp to the future parts that was at some point agonizing. He explains it, I imagine as a 16 year old would in an attempt to explain a weird phenomenon. Though those moments become a relevant and significant part in our protagonist future, I felt it could have been introduced better. The Tony Hawk conversations though entertaining doesn’t add up to much, but maybe just a picture of Sam’s teenage life.

Slam is YA literature and for some parents it might raise alarms given it deals with sex and teenage pregnancy. However, I do think it helps educate teenagers on the truth about sex, contraceptives and pregnancy; giving readers the gritty details and complexities of balancing education, parenthood, and relationships.

Check out this review of Slam: The New York Times

2 comments on “Slam by Nick Hornby”